According to the information, Apple is going to release an iPad keyboard which will be introduced by the company with an in-built trackpad. According to the informer familiar with the matter, the recent step of Apple could be seen as its efforts to place the tablet device as the most preferred alternative to laptop computers. Apple along with its main manufacturer Foxconn Technology is all set to prepare the keyboard for mass production. It is noteworthy that Foxconn Technology is a Taiwan based contractor and makes most of the iPhone used all across the world. The release of new accessory alongside the next version of the iPad Pro by Apple is expected until the end of this year. 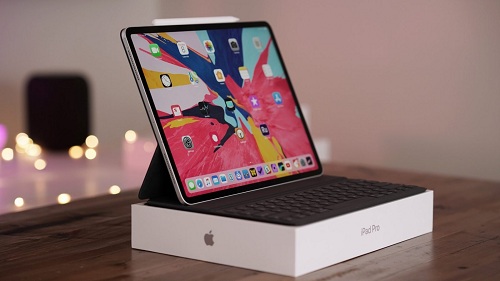 However, no comments have been made by the spokesman of Apple on such speculations. But, it is quite visible that Apple is continuously bringing the hardware and software features used in iPad Pro however gradually. These features are all in line with the traditional desktops and laptops and it is an effort to establish the iPad as the most preferred computer for users. It seems that such steps may also lead to affect the sales of the popular MacBook computers manufactured by Apple. If we look into the innovations introduced by Apple, then it seems that in the year 2018, the tech giant introduced an iPad Pro which has exceptional features making it comparable regarding performance to that of the MacBook computers released by apple.

Apple later introduced many tweaks to make the iPad Pro compatible more with the accessories of computers such as cameras and high-resolution displays. To make the iPad Pro compatible with computer accessories, Apple introduced a USB-C port which was in industry standard and was the replicate for the proprietary lightning port. Now, if we look into the release of a new accessory, it could be said that the demand for an iPad keyboard alongside a trackpad is not only growing but increasing also among the consumers.

Another person who is also familiar with the matter disclosed that the experiments regarding the development of trackpads for iPad have been going on for many years and a dedicated and expert team of developers At Apple are involved in the experiments. It has been revealed that some capacitive keys with sensors have been developed but it is still not clear whether it will be a feature of the planned product or not. Meanwhile, Apple has won the Patent copyrights for the iPad keyboards. These keyboards would have the capability to accept the gestures of trackpads and has the capacitive keys.

Such revealed news is also making it clear that Apple is planning to release the product and the materials used for making keyboards will have the heavy use of fabric. Meanwhile, the biggest question is that if Apple successfully will ship its product on time as due to the outbreak of the coronavirus in China, the procurement managers working at Apple have been restricted from travelling to China. Also, Suppliers such as Foxconn Technology are also problems regarding g the shipment of the materials due to the virus control measures that have led to the labour shortage.

Aida Martin  is a creative person who has been writing blogs and articles about cybersecurity. She writes about the latest updates regarding mcafee.com/activate and how it can improve the work experience of users. Her articles have been published in many popular e-magazines, blogs, and websites.